Sending a rocket to Mars 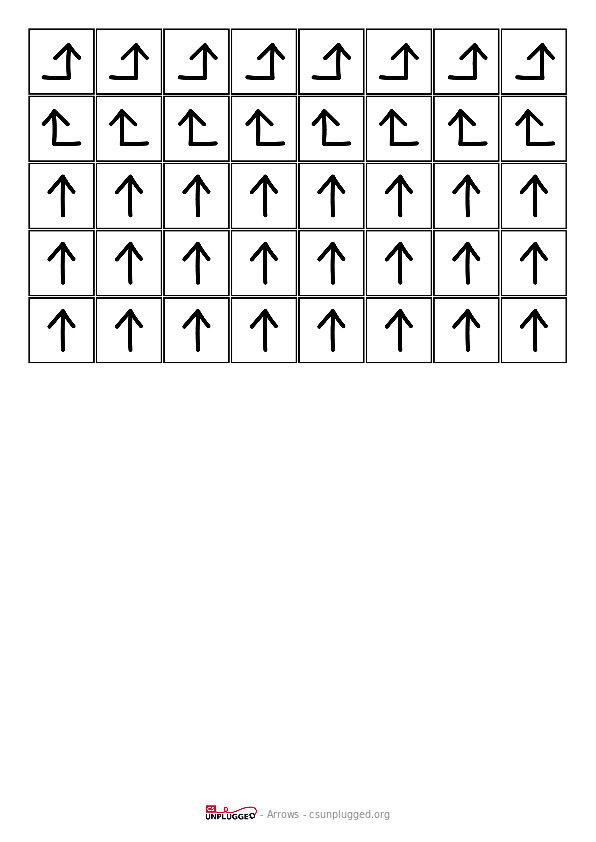 Cut these squares out for students. 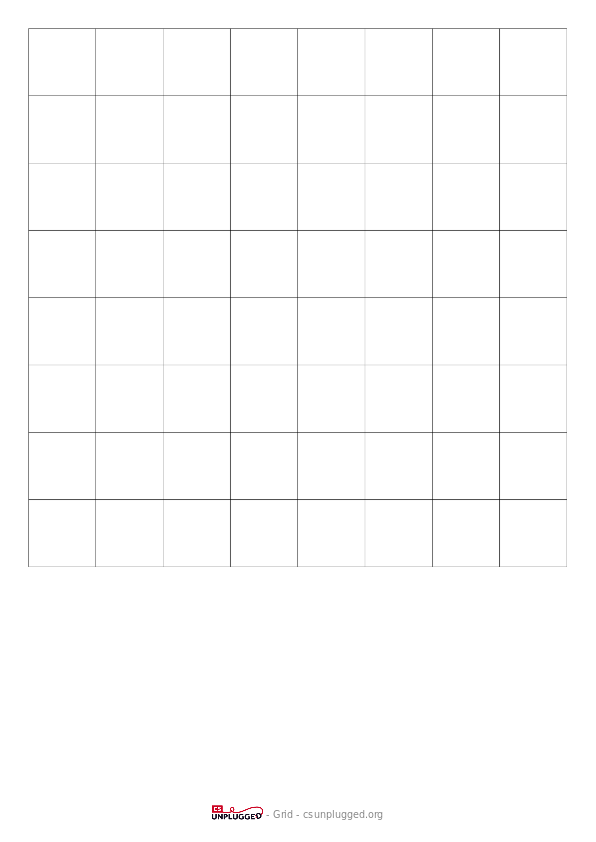 8 x 8 grid for students to use if no large grid available. 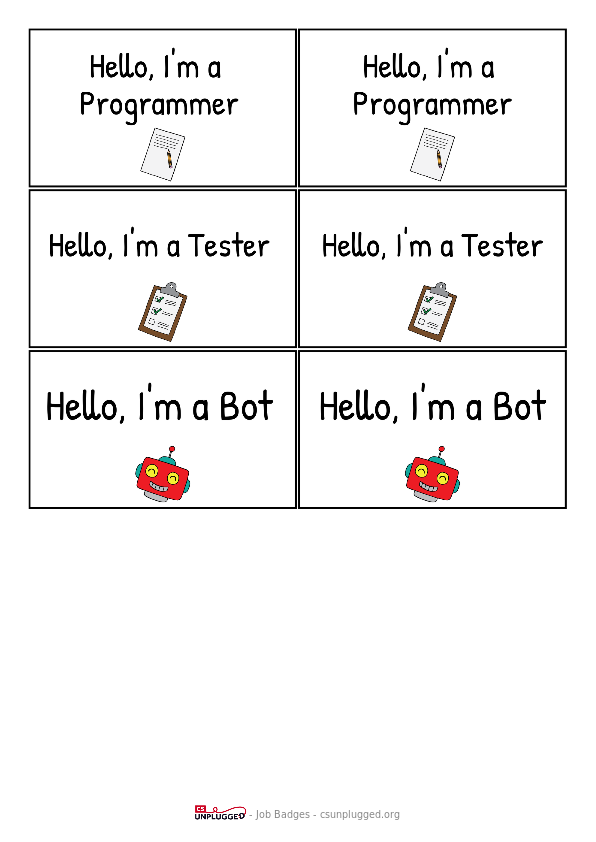 Cut these out and use them as badges for the three students doing the three jobs respectively. You might want to put them in a name holder on a lanyard. 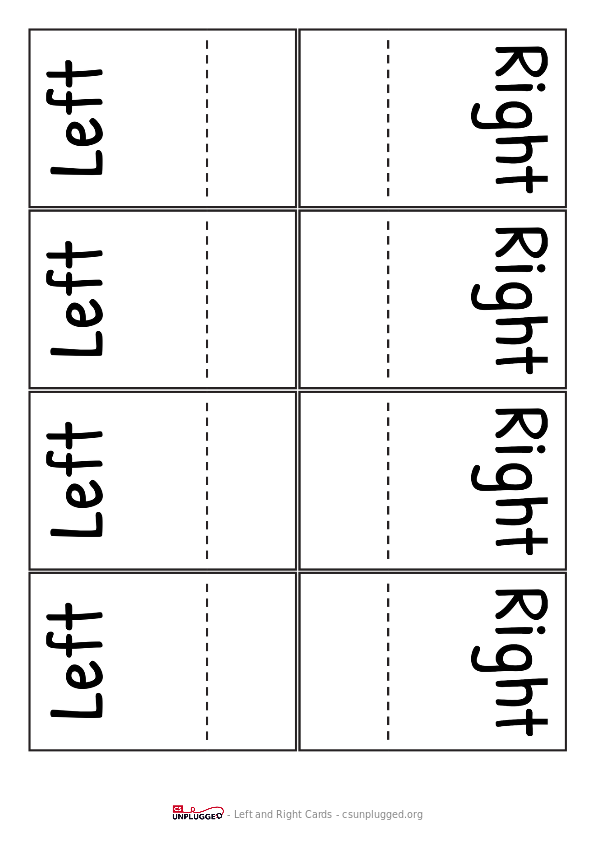 Cut these sheets out for students who are still learning their left and right.

Ideally this lesson should take place around a large grid such as:

Ask for two volunteers and give yourself and them the roles of:

Role 1: The Developer (who writes the program) - The teacher will model this initially

Role 2: The Tester (who instructs the Bot and looks for bugs)

Role 3: The Bot (who runs the program)

Teacher: "I’m going to be the programmer, but I’m going to need your help. We are programming the Bot, not just remote controlling it, because ALL the instructions are written before the Bot can follow those instructions."

"It’s our job to write down clear instructions for the Bot, who is going to be (say the person’s name). (Student's name) will be the Tester and is going to give the instructions to the Bot. The Tester will be on the lookout for bugs."

"First of all we need to decide, what programming language are we are going to use for this? I’ve chosen arrows to represent move forward, turn left and turn right."

"Debugging is fun because you get a chance to change your program after it’s finished when you notice it’s not working how you thought it should."

"First of all I need to decide, what programming language are we are going to use for this? I’ve chosen arrows to represent move forward, turn left and turn right."

If students aren't sure about the left and right direction, you can print the "left and right hand cards", and stick them to their shoes or have them hold them in their hands.

Have the Bot act out the individual instructions: forward means step one square forward, and left and right mean a 90 degree turn on the spot in the square (not moving to another square).

Teacher: "We’re going to write our own program that gets the rocket to fly to Mars. The goal is to get the rocket to the square that Mars is in. Let’s write the first two steps on the board together." (Draw two forward arrows.)

"So let’s try that, and see what happens.

"Tester - could you please take these instructions and pass them onto the Bot. Be ready to underline what doesn’t work when you see the Bot doing something that doesn’t look right, and hand the whiteboard back to me to figure out how to fix the bug."

Teacher: "Bot - please pick up the rocket ready to receive the instructions for the tester." (The bot can carry a toy or token representing the rocket; or they can imagine that they are guiding it).

"Tester, did the program run as you expected it to?" Depending on the tester's response, if it did then carry on programming, otherwise fix what didn’t work and run that again. In this example the rocket should be in the square three to the left of Mars.

Now let’s add to it. What would we program next?

Point to where the next piece of code needs to be added and add turn right, turn right. (This is deliberately incorrect.)

I think it’s ready to test now. Tester, please test my program (the programmer hands the program on the whiteboard to the tester and the bot should return to the starting square ready to rerun the program).

Teacher: Remember Tester, it’s your job to find any "bugs" in my program. A bug is when my program isn’t doing what was expected. Your job is to draw a line under the piece of code where you notice the instructions seem to be going wrong. You can stop the Bot at the point that you think there is a bug.

Tester then reads the instructions in the program off the board and the Bot executes them as they are read.

Teacher: "Excellent, you found a bug! I love finding bugs, so I can start solving them. Now class, let’s work through this together to find my bug. Tester, you’ve done a great job finding it, but it’s the programmer’s job to find and fix the bug."

Once the bug has been identified then ask the Tester to test again. Ask the Bot to pick up the rocket and go back to the start position, then the Tester reads them the instructions.

Did we successfully program the rocket to land on Mars? How do we know?

Have the students choose their own two toys (one to be a space travelling object, the other to be the destination) and have them practise this task, as follows.

Add barriers to the grid so that the path is more complex because the Bot needs to avoid the barriers. This could be space junk and comets, or you could invent a new scenario for the grid.

Ask if they can write programs with only the Right and Left turn instructions (i.e. no Forward instruction)? (This isn't possible, as you would only be able to turn around on one square.)

It’s quite common to think that programming is some kind of special talent that people either have or don’t have, but this couldn’t be further from the truth! Like all skills, programming is something you learn through practise, making mistakes, and learning from them. The most important skill that programmers need is to be able to communicate with others, especially when they are finding and describing bugs. Bugs happen all the time in programming, so being able to identify where the bug occurs and problem solving how to fix it is incredibly important. It doesn’t matter how experienced you are at programming, there will always be bugs that need to be found, and fixed. That’s why the word "debugging" is so important to programmers.

Now that you are all programmers, what did you think was the most challenging part of being a programmer?