Reinforcing numeracy through a Sorting Network 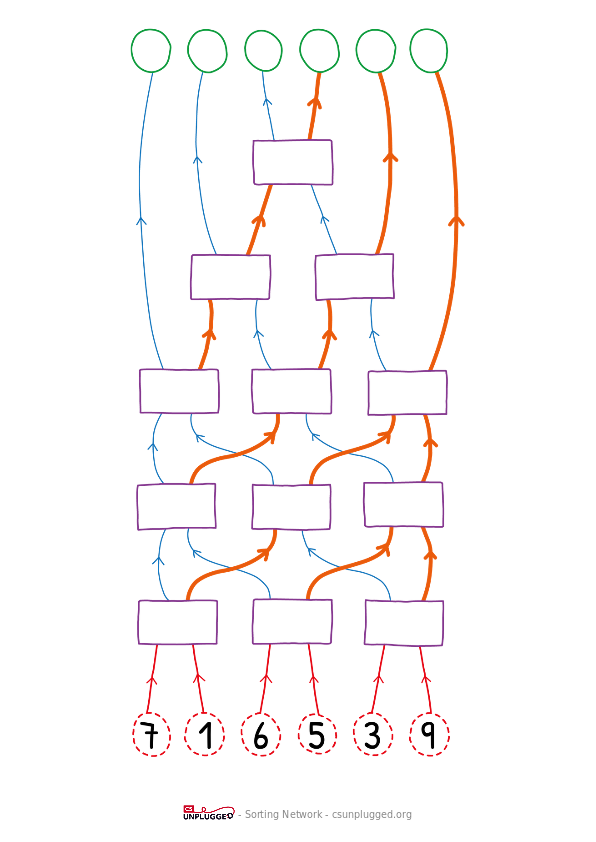 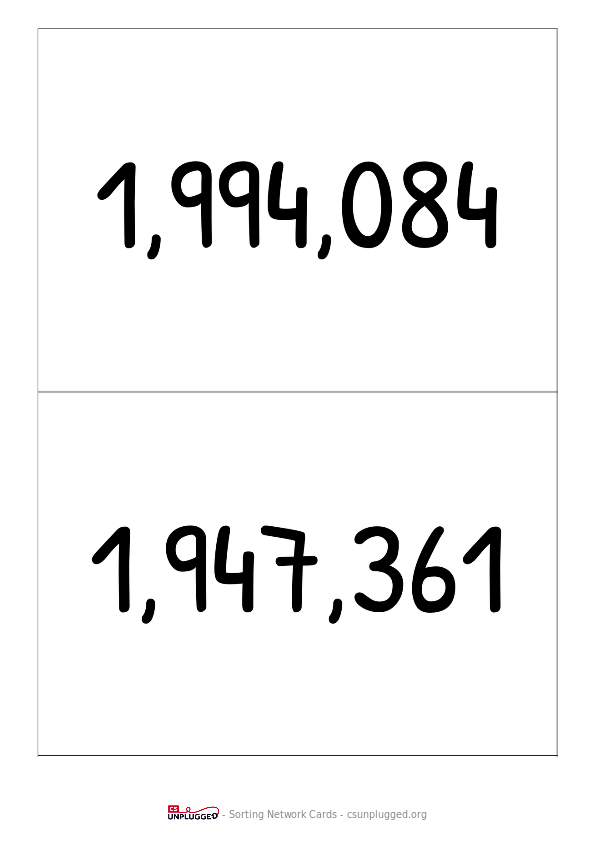 Tasks such as tidying the classroom, picking up rubbish, or reshelving library books may come up as ones that benefit from multiple helpers. Things that don't go faster might include delivering a note to the office (10 people delivering the note won't get it there 10 times faster), or washing dishes if there is only one sink (two people are faster than one, but more people probably can't speed it up).

Use the Sorting Network template to draw a 6 person Sorting Network on a paved surface outside using chalk (other alternatives include using masking/painters tape on a carpet or wooden floor, tape on a tarpaulin, or line marking paint on grass). Note that the Sorting Network needn't use different colours or line thicknesses, but if suitable chalk or tape is available, this can help students remember which way to go. It should be large enough that two students can comfortably stand in the rectangles; the more spread out it is, the more effective the exercise is. In a very confined situation, it could be done on a desk top using game counters instead of students moving around, but this is much less engaging.

Show the students the Sorting Network drawn on the ground, and tell them "This chalk computer can do some things very fast, let’s investigate what it does."

This technique with parallel instructions can't run directly in the kind of computer system that students are likely to be learning about, as simpler systems can only compare one pair of values at a time, while this one is comparing up to three pairs of values at the same time. But although this algorithm hasn’t been written to work on a conventional system, there is still an algorithm to be observed, a parallel algorithm, and this can be implemented with specialised hardware and software. The challenge with creating parallel algorithms is to have as many things happening at the same time as possible, so that we can get things done faster. However, it's not always easy to break a problem up so that separate parts can happen at the same time, as often each comparison depends on the results of another. The diagram that we used above happens to be the shortest one we can design for sorting 6 values.

How do we know this Sorting Network is reliable and works every time?

The outcome we want to achieve is that the numbers come out in the correct order with the smallest number being in the left-most box and the second smallest number finishing next to it, right through to the largest number being in the right-most box. If we want to make sure it works for all possible inputs, then we would need to try it for every order that the values might start in - it turns out that there are 720 (6x5x4x3x2x1) different orderings that 6 items can start in, so that's a lot of cases to test. For sorting more than 6 items, there are way too many different orderings to try out, so we must make a mathematical proof of why it works. Here are some elements of such a proof:

Let’s disregard the numbers for now and look at the Sorting Network from the point of view of following the paths. If the smallest number was in node 1, what path would it take and does it end up in the leftmost node at the end?

Now repeat this by asking if the smallest number was in node 2, what path would it take and does it still end up in the leftmost node at the end?

Repeat this until you’ve tested all 6 nodes. If the smallest number ends up in the leftmost node regardless of where it starts, that's part-way to being sure that the structure always works.

You can repeat this with the largest number - no matter where it starts, it will always end up in the right-most node.

Doing this for the other four values (e.g. the second to largest) isn't quite as simple, but computer scientists are able to prove that they will also always end up in their correct position.